PEACE AND STABILITY: WAY AHEAD IN THE SPRATLYS

Originally published at the Philippine Star on July 13, 2011

Despite the current security tensions that can increase the risks of war due to clash of sovereignties in the Spratlys, peace and stability is still the way ahead in this contested body water.

There are four major reasons why.

First, all claimants, namely Brunei, China, Malaysia, the Philippines, Taiwan, and Vietnam have all agreed to manage the disputes in the Spratlys peacefully. Though all sovereign states have the right to use force when their vital national interests are threatened, the use of force to settle international disputes is no longer the norm in international politics.

The principle of peaceful settlement of inter-state conflicts is embodied in the Charter of the United Nations (UN), in which all sovereign states are members of. The UN has also provided various mechanisms for the peaceful settlement of international disputes in order to ameliorate the security dilemma of states in the condition of international anarchy.

Second, we now live in the era of globalization where all sovereign states have become so interconnected through commerce, trade, and tourism.    This interconnectedness is evident in the South China Sea through international navigation.

It is already well known that the South China Sea is one of the busiest sea routes in the world. In fact, the South China Sea is a maritime superhighway with at least 50,000 ships passing through its sea-lanes annually. Thus, waging a war in the Spratlys is costly for claimants and counter-productive for all states depending on the freedom of navigation in the area.

If claimants have overlapping waters to patrol, they can sort our their differences through negotiations, either bilaterally or multilaterally.

Acquisition of submarines, frigates, corvettes, and offshore patrol vessels by claimants are not meant to support an “invasion” force. They are being acquired to primarily confront the growing non-traditional security threats in the maritime domain such as piracy and armed robbery against ships, drug trafficking, arms smuggling, human trafficking and international terrorism.   Without those naval assets, “internal waters” and Exclusive Economic Zones (EEZ) of claimants will be prone to abuse by non-traditional sources of security threats. The current tensions in the Spratlys gave claimants a strong justification before their taxpayers to increase national budget for naval acquisitions.

The current tensions gave all claimants a better understanding of the disputes and their respective national positions on the issue.    With this understanding, claimants will be more circumspect and nuanced in dealing with each other in order to avoid a war in the Spratlys.

If there are claimants anticipating an inter-state war in the Spratlys, they have not come to grips with the reality of globalization and complex interdependence of nations. They will become a pariah state whose behavior is not in sync with international norms of peaceful behavior.
Posted by Rommel Banlaoi at 5:23 AM No comments:


“The peace talks will just be an exercise in futility if the direction of the peace process will not represent the aspiration of the Bangsamoro people,” Murad argued.

This gap is now creating an impasse in the current peace talks.

If not mutually resolved by the two parties, this impasse can develop into a deadlock that can pave the way to the resumption of hostilities in Mindanao, something that we, stakeholders of peace, do not want to happen.

But Murad said that “we are not yet at a deadlock.”

Murad lamented, however, that “As the negotiations drag on with no solution to the Bangsamoro Question on sight, some sector of the Bangsamoro society lost hope in the peace process.”

It is very sad to note that after 14 years of negotiations, what we have seen are more talks and less peace.

Maybe more talks are not enough. We need much more talks to finally achieve more peace in our land. 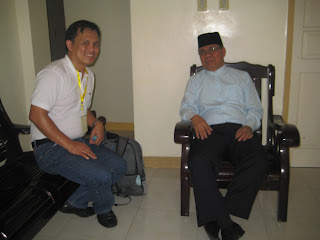 Posted by Rommel Banlaoi at 1:10 AM No comments:

CLASH OF SOVEREIGNTIES IN THE SPRATLYS

Originally published at the Philippine Star on June 30, 2011


When the United States assured its friends and allies in Southeast Asia that it is committed to defend and assist them on rising tensions in the Spratlys, China just warned the US to back off and stay out of the South China Sea disputes.

China’s Vice foreign minister, Cui Tiankai, even stressed that “the United States is not a claimant state to the dispute. So, it is better for the United States to leave the dispute to be sorted out between the claimant states.”
With exemption of Taiwan, all claimants in the Spratlys are all sovereign states with a defined territory in which they should exercise full control. However, they have clash of sovereignties over some territories in the South China Sea called by Vietnam as East Sea and by the Philippines as West Philippine Sea.

Taiwan has identical claims to sovereignty with China. Countries adopting a one-China policy regards Taiwan as a mere province of China. Thus, Taiwan’s sovereign claim in the South China Sea disputes is complicated. But it occupies the largest island in the Spratlys: the Itu Aba or Taiping Island that has an excellent helipad and a very long and highly cemented runway.


Vietnam claims “incontestable sovereignty” of two island-groups in the South China Sea: the Paracels and the Spratlys. Clash of sovereignties in the Paracels only involved China and Vietnam (and to a certain extent Taiwan). In Spratlys, it involved Brunei, China, Malaysia, the Philippines and Vietnam.

Vietnam presently occupies 21 islands, reefs and cay in the Spratlys with impressive facilities.  Its largest occupied island, Lagos (or Spratly Island), is the most heavily fortified with a solid runway, a pier, at least 35 building structures, around 20 storage tanks, at least 20 gun emplacements, at least 5 battle tanks and some parabolic disk antennas and a spoon rest radar.

The Philippines claims sovereignty and jurisdiction in the Spratlys within its Kalayaan Island Group (KIG). It regards KIG as an “integral part of the Philippines.”

The Philippines strengthens its sovereignty claim using the Roman principle of “dominium maris” and the international law principle of “la terre domine la mer,” which means that land dominates the sea.

Under this principle, the Philippines argues that it is exercising sovereignty and jurisdiction over the waters around the KIG or adjacent to each relevant geological features of the Kalayaan Island, which is under the local government control of the Municipality of Kalayaan.  The Philippines contends that this position is provided for under the United Nations Convention on the Law of the Sea (UNCLOS).

The Philippines also maintains makeshift naval detachment facilities in five other islands, one reef and one shoal.  Its facilities in the Rizal Reef are just wooden structures  and two small single-storey hexagonal concrete buildings manned by four personnel of the Philippine Navy.

Malaysia’s claim to sovereignty in the Spratly is based on the continental reef principle outlined by UNCLOS. As such, Malaysia claims 12 features in the Spratlys. But it only presently occupies six features: Ardasier Reef, Dallas Reef, Erica Reef, Investigator Shoal, Mariveles Reef, and Swallow Reef.

Malaysia also has a very good facility in the Ardasier Reef with an excellent helipad, sepak takraw court, gun emplacements and control tower.  The facilities in the Ardasier Reef are almost identical with the Malaysian facilities in Erica Reef, Mariveles Reef and Investigator Shoal.    Malaysia also maintains a symbolic obelisk marker in the Louisa Reef being claimed by Brunei.


Brunei Sovereignty Claim Based on EEZ

Brunei’s claim to sovereignty in the Spratlys is based on the principle of Exclusive Economic Zone (EEZ) provided for by UNCLOS. It provides coastal states 200 nautical miles EEZ in which coastal states have sovereign right to exploit resources of the area.

Brunei does not occupy any feature in the Spratlys. But it asserts that the Louisa Reef being claimed by Malaysia is part of Brunei’s EEZ.

The Spratly dispute is a complex case of contested sovereignty claims. Because of the strategic value of the Spratlys, which is proven to have enormous oil and natural gas resources not to mention its very rich marine resources, it is very unlikely for all claimants to surrender their sovereignty claims.

All claimants rule out the use of force to resolve their maritime disputes in the Spratlys. But they continue to upgrade their military capabilities to assert their respective claims.

To manage disputes in the Spratlys peacefully, claimants may consider anew the shelving of sovereignty issues and be more pragmatic in exploring the possibilities of joint development. This is an option that can put claimants in a win-win situation.
Posted by Rommel Banlaoi at 5:18 AM 2 comments:

Rommel Banlaoi
Rommel Banlaoi is the Chairman of the Board and Executive Director of the Philippine Institute for Peace, Violence and Terrorism Research (PIPVTR) and Head of its Centre for Intelligence and National Security Studies (CINSS). He is also a Senior Fellow at the Yuchengco Centre in Manila. He was a Professor in Political Science and International Relations at the National Defence College of the Philippines (NDCP) where he once served as Vice President for Administrative Affairs and Assistant Vice President for Research and Special Studies. He became Assistant Professor in International Studies at De La Salle University (DLSU), Manila and Instructor in Political Science at the University of the Philippines, Los Banos (UPLB). He also served as University Research Associate at the University of the Philippines (UP), Diliman where he took is BA, MA and PhD (ABD status) in Political Science. He the author of several books, monographs and journal articles on Philippine security issues, Philippine foreign policy, regional security and terrorism. His latest book is Philippine Security in the Age of Terror (2010) published by CRC Press/Taylor and Francis.